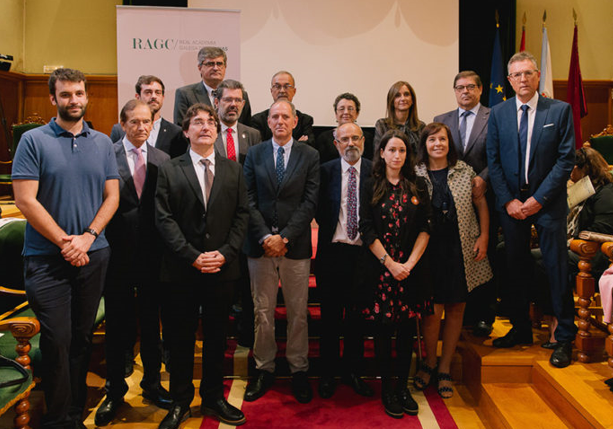 Maite Moreira, Professor of Chemical Engineering of the USC received last Tuesday, October 8, the Isidro Parga Pondal medal for her scientific career awarded by the Royal Galician Academy of Sciences (RAGC) for the first time this year.

In addition to Maite, which was awarded by the Technical Sciences section, four other researchers from the USC and Uvigo were awarded: Carlos Diéguez González, director of the Singular Center for Research in Molecular Medicine and Chronic Diseases (CiMUS), received the Angeles Alvariño Medal Alfredo Bermúdez de Castro Professor of Applied Mathematics at the USC, the Enrique Vidal Abascal medal. The scientific director of the Singular Research Center in Biological Chemistry and Molecular Materials (CiQUS), José Luis Mascareñas, the Antonio Casares Rodríguez medal, and Xavier Labandeira Villot, Professor of Economics at Uvigo and director of the Economics For Energy research center, the Domingo García-Sabell Rivas medal.

The celebration of science in Galicia

The awarding of the medals to the investigation was framed in the act of celebration of the day of science in Galicia, which this year honors Tomás Batuecas, first professor of Physical Chemistry in Spain (enabled in the USC) in 1932. In the act The Ernesto Viéitez Research Awards were also presented, in which the researcher Maria Celeiro received an honorable mention.